Kill SB 986 Before it Kills Us

♥ Just in time for Back to School: the “California Stop” may be legal soon. Let’s hope not ♥

Existing law, CVC section 21453, requires motorists approaching a red light to stop and remain stopped at the limit line, or if no line, at the nearest crosswalk, or if none, before entering the 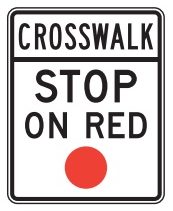 intersection. Thereafter, they can proceed only when it’s safe to do so, i.e., AFTER they check for oncoming pedestrians, bicyclists, and cars.

SB 986 strikes the mandate in 21453’s first paragraph, which requires drivers to remain stopped UNTIL they LOOK FIRST. The phrase, “remain stopped,” is eliminated from circular red light situations (but is unchanged for red arrows; there, drivers must stay put until the signal permits movement). That seemingly small change effectively legalizes the “California stop” at red lights, allowing motorists to look left while turning right.

SB 986 fails to consider our typical wide, arterial roads where cars in adjacent lanes obstruct a motorist’s view. With 2-5 lanes in each direction, edging forward is always dicey. Add a slight curve and/or a few parkway plants and/or a truck . . . even the safest drivers have a hard time seeing what’s coming, especially kids. “Remain stopped” in existing law is important.

Motorists won’t stop until it’s too late. Most parents instruct their kids to stay out of the road and bike and skate on the sidewalk. Most kids don’t understand the dangers of sidewalk riding, especially when going against vehicular traffic. Kids think a green light means “go” and fly from curb to curb. Approaching the intersection from a motorist’s right, then entering the crosswalk is deadly because motorists often don’t look right for oncoming cars; they look left.

And lives are ruined.

More than 1/3 of Orange County’s injury collisions were caused by drivers failing to yield to people in crosswalks. Crosswalk striping is often ineffective under existing law. California motoring culture is already renowned for gliding around corners without regard to intersections’ limits.

Here’s what SB 986 proposes to legalize (via David Huntsman at bikenewportbeach.org):

That’s costly. In May, 2015, the National Highway Traffic Safety Administration published its revised “The Economic and Societal Impact of Motor Vehicle Crashes, 2010.” The U.S. Department of Transportation now recommends the latter for guidance on risk reduction, approximating the value of a statistical life as $9 million in 2010-12. Here’s what that meant nationwide in 2010:

California is the worst in the nation in economic losses caused by all types of vehicle collisions (again, estimated for 2010 by the NHTSA study, page 145):

Quickly estimating the costs of OC’s pedestrian and bicyclist deaths 2008-2013:

In 2010 alone, our country lost more than $100 billion because cars hit bicyclists and pedestrians. You don’t have to walk or bike to get the point.

SB 986 may make local traffic control more expensive, too. Post SB 986, if a city wants to require a stop before the limit line, a city might need to replace the existing circular signal with a right turn signal because that part of CVC 21453 will remain unchanged. Since signals are synchronized to optimize traffic flow, changing one signal affects movement in every direction.

Will SB 986 force cities to change all the signals at a particular intersection? Maybe. If so, it costs about $300,000 to signalize an intersection; ten intersections is $3 million. Can we really afford that? Should we? From that perspective, SB 986 is plain dumb.